I probably shouldn't have drove home yesterday from my appointment - but i felt really good prior to it.  I was driving singing out loud - windows open - lucky to be in the sunshine- but everything started to fade - like the air slowly being let out of a balloon.  I had all my snacks with me - sometimes i look like a mother of a toddler - everything you may need - but i'm the 3 year old.  I felt okay leaving, but then stopped at the grocery store and i knew things were getting bad when i couldn't multi-task.  My mom called to check in on me and i couldn't talk - i became robotic in thinking...like that little girl that was on sesame street...a cup of sugar, gallon of milk, stick of butter...over and over.

By the time I got home, all I could do is get in bed.  My friend was coming over later to help with dinner but by 5pm i had to get out of bed and worked slowly to prepare something to eat.  By the time my friend got here - the act of making dinner and eating just tipped the scale and it was like i was no longer singing rolling the deep - i was spinning down deep.

so today there was no option but to take a car to my appointment.  i was lucky to sleep hard and when i woke it was tough to move.  once again, the robotic thinking began.  Juice - Bed.  Okay, could barely feel my feet below me - and i didn't want to have the phone away from me, worried i would fall and be like the lady in the commercials!  "i've fallen and i can't get up!" Next step - eat.  Okay, you can make it - that's done - back to bed.  Oh, and all the digestion issues i have decided not to share - google it - then when i made it back to get ready i just looked hard at myself in the mirror - focus - focus - you can do this - again.  Wash face. Done. Moisturize. Done.  Brush teeth. Done.  Breathe. Breathe.  Okay - look presentable - fake it - fake it.  Not bad.  Back to lay down.

Now its time for lunch - i know i'm getting a blood draw today - need to eat.  slowly slowly.  Alright, feeling a bit human.  Car is here.  I get in, and the thing is - I really like people.  Its not a small talk thing, i have always enjoyed meeting and learning about other people. So when I give the address to the driver - John - i make a joke not to worry that I'm not contagious.  John asked me questions, and then talked to me about his childhood, it was one surrounded by opportunities to make poor choices.  He talked about a man he knew that served 10 years in maximum security prison and after being released he told John that he was more free in prison than he had been before - and was trying to teach John the lessons he had never learned.  John said he was only about six and couldn't understand in his early youth what he meant - but has he became a teen and saw the world around him - he knew exactly what he meant.  The words that man told him became his mantra - that "freedom is in your heart."

As i sat in the plush leather seats, looking out the window -i thought about how this illness takes many of your freedoms - but there are elements all around us that can never steal the freedom of our hearts -

After my appointment, we rode quietly back, i sunk into the back seat - sunglasses on - pretending this black sedan was driving me for a different reason - day dreaming - i made it.  As my eyes were closed behind my glasses - and i was drifting - John interrupted the thoughts in my head - and out of no where - said that I was very brave.  And it meant so much to me, because this illness makes you feel anything but brave and I felt grateful once more for the kindness of strangers.

When,  I got inside the house, and talked to my friend on the phone and she was telling me about her what a great day she was having because someone called and complemented her on her work - and how good it made her feel. Then she hung up the phone and a co-worker made a dumb blonde joke, and how in an instant it changed her mood.  And I thought again about my "driving miss daisy" experience today, and how the kind words did much to lift my spirits.  Its always a reminder how powerful our words are to others and the effect they have on others...thanks john.

You ever feel like throwing something - i'm in the mood to smash a bunch of plates - but considering they're not my plates i better reconsider.  I thought of this because i heard a funny story yesterday about someone's boss being so angry she threw a frame across the room - and it cracked me up - such a visceral childish act - but it gets the point across...so instead of throwing plates i am going to throw some words - A to Z style...last night i was laying in bed with my window to the world these two "stars" were so bright and one exactly on top of the other...they were mesmerizing - turns out they were venus and mercury.  It gave me such a sense of calm and today when i woke up i felt better than i had in weeks.  Then it all came crashing down because I got a breakfast sandwich and it had a bit of avocado on it - and despite picking it off, the english muffin must have shared the cutting board because within minutes of eating it, my lip started to swell a bit and my throat was all itchy - and i wanted to throw some plates - because i finally wasn't' exhausted - but soon was face down in bed from the 2 Benadryls i took -

so here we go...if there was a noise affect imagine porcelain crashing

Nothing like screaming X, Y, and Z
But i will focus on N -
And Mercury and Venus...its a big big universe....you have to look hard to see - in the darkness you find light 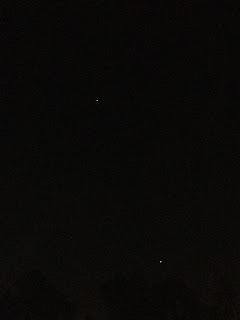